Be the first to review this product
$149.99
In stock
SKU
BMRR-BU-ELLISON4
Add to Wish List Add to Compare
Skip to the end of the images gallery 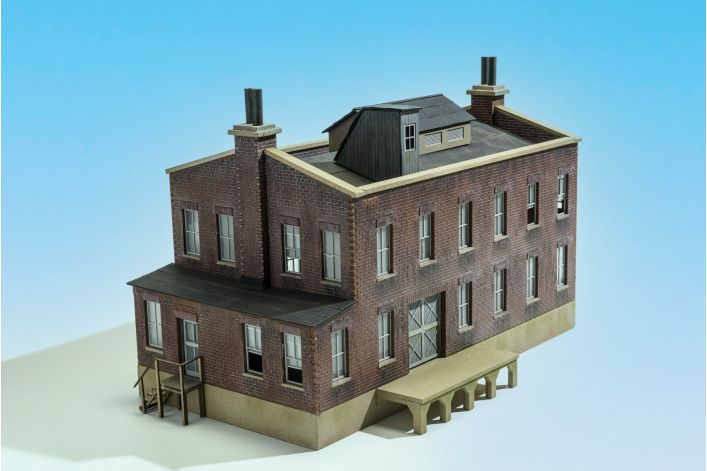 Skip to the beginning of the images gallery
Details

The Sanky Wanky Coffee Co. is the fourth kit in my highly popular Frank Ellison Tribute Series.  Frank was a model railroad pioneer back in the 1930s, 40s & 50s.  He was considered a top name in the field and his beautifully built Delta Lines was perhaps the most widely known model railroad in the world according to John Page, the editor of Model Railroader Magazine in the early 1950s.

Frank authored a series of articles on all aspects of model railroading.  Of particular note were his "How-to”"pieces on scratch building the structures he created for his railroad.  Back then, there were no building kits and detail parts like we have today.  He made everything out of cardboard with the features like corrugations drawn in with ink and colored with oil base artist colors.

So, I am bringing these structures back to life with my spin on them.  The idea is that if Frank were alive today, this is how he would do it — using modern methods and materials.

This easy to build laser cut kit features laser cut masonite walls, basswood foundation, freight dock, doors, windows and stairs.  The roof is mounting board with peel and stick tarpaper strips.  The footprint is 137/16 x 81/2 which includes the freight dock.

The complete photographically illustrated instructions are a primer on kit construction geared to the beginner.

Also included is a reprint of Frank Ellison's original article as it appeared in the March 1946 issue of Model Builder Magazine.  Here’s an excerpt: "...This, fellow model railroaders, is the home of Sanky Wanky Coffee Co., Roasters and Blenders of Fine Coffee — coffee that not only lets you enjoy a good night’s sleep, but actually puts you in the arms of Morpheus..."